It really is a big deal.

I finally found them! Well actually a really nice guy with his twins in a pram wearing a camera found them, and came and got me so that I could see them too. Many thanks to him for that, but what I mean is I finally got to see them! 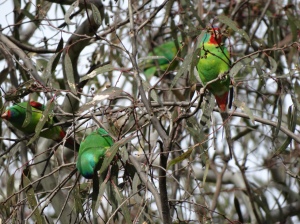 Several of the Swift parrots at Macleod station

Otherwise named by other birders as The Great Houdini! They have certainly nailed the vanishing act on the last three times I’ve gone looking for them! But to be fair, thanks to some advice from another birder, I’ve realised that I’ve been looking for the wrong thing. 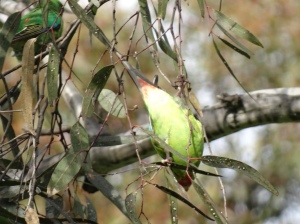 The belly of an upside down Swift parrot doing acrobatics

I’m used to rainbow lorikeets and musk lorikeets. You can tell where these birds are at all times of the day and night by the raucous racket that they make! So every time I’ve gone over the Macleod I’ve followed the noise. This has been an unfailing tactic in the past, so I went by history and experience. This did lead to a first in a lifetime sighting of a few Scaly-breasted Lorikeets mixing with the Musk and Rainbow Lorikeets, but no Swift Parrots. 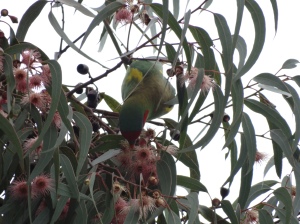 Just for variety, one of the Musk Lorikeets, the noisy ones!

So today was my ‘4th time is the charm’ visit! The plan: walk quietly around the station looking up into the eucalypt trees for sight of birds, rather than listening for their sound. And it was the perfect plan. Even without the kind gentleman I would have come across them, but sharing it with someone else was nice. The excitement and satisfaction is better shared, otherwise random shrieks of joy and jumping up and down clenching fists frightens nearby innocent strangers and inspires parents to gather their children and retreat to a safe distance! 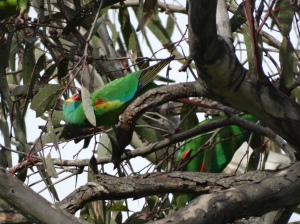 So many different colours! It’s hard to take it all in!

So, the Swift Parrot. This flock is estimated to be up to 30 birds, so I’ve heard. The word has spread like wildfire among birders around the country, and people have traveled serious distances to see these gorgeous creatures. Most days I see people posting photos to Facebook of their experience with finding these quiet, well camouflaged birds. And the sightings have been very reliable every day for several weeks. And now I’m a part of it! 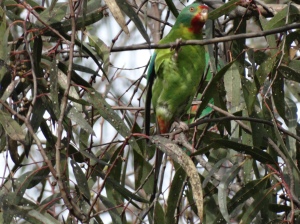 This Swift parrot climbing up the tree for more food

Why are we so excited and motivated to see those beauties? Well for a start they are just stunning! Pretty colours, graceful flight, acrobatic climbers and most significantly, they are endangered. These parrots breed only in Tasmania in the summer; during those months they can only be found in that state which is their home territory and the location of their nests in hollow trees. They migrate to south-eastern Australia, i.e. Victoria and maybe southern NSW, in the winter. They are considered nearly extinct in SA. Year old birds who won’t be breeding sometimes stay here for the summer while the majority of the population head back to Tassie.[1] 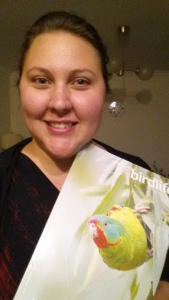 I feel like I’ve met a celebrity in the Swift Parrot! I might never see them again, and here they are on the cover of Birdlife’s quarterly magazine!

So they’re endangered, only here in the winter and they’ve set up shop right here in the city, in the square between a strip of shops, a kindergarten, a school and a train station of all things! Not exactly the distant, peaceful, undisturbed bush/forest that you would imagine. 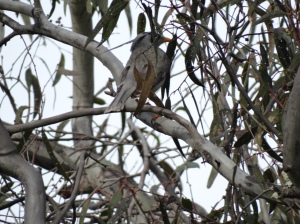 The annoying Noisy Miners trying to shoo off the Swift Parrots…eventually they won, for now

Which gives me an opportunity to grind one of my favourite axes!

I take issue with people favouring the country to the exclusion of the city. 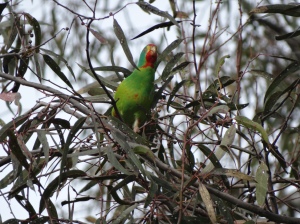 Well Hello there! Nice to see you 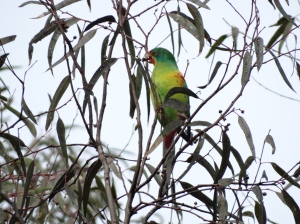 Just so pretty from every angle!!

I love the country. It really feeds me to find some green spaces. I love the city; my life is there and I love the energy and opportunities.

I don’t understand having a total block opinion of the city. It’s the greatest variety of types and cultures and one opinion can’t apply as a blanket. My husband came from the city, my pharmacist education came from the city, some of the best days of my life have been in the city. Of course growing up in the country was something I loved too. 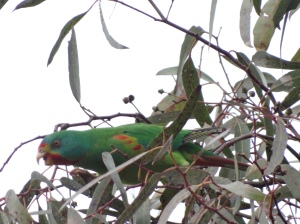 Territory wars are rife around Macleod, Noisy Miners vs. anything else! This Swfit parrot is telling Noisy to back off!

The majority of “country people” and “country drivers” don’t live in the country, as in open plains and wide spaces. Not many people live in the actual country. And as above, suburbs vs suburbs. 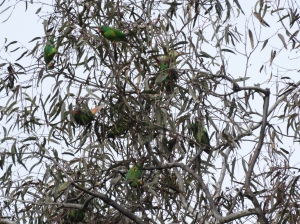 A flock of Swift Parrots – if they sit still it’s pretty easy to miss them!

Those in the CBD and those out in the open country can debate the issue, but most people forget that for the rest of us, we’re actually living more or less the same life whether we’re in a town or city.

I can find undisturbed bush land where you can’t hear any traffic and feel like you’re in the middle of nowhere within a 10 minute drive or bike ride from my house in the middle eastern suburbs. Once there you would have no idea that there’s a freeway just the other side, that you’re surrounded by housing. And at the centre of a lot of towns you’ll find it hard to find a park, be walking past plate glass buildings and have all the fumes of the cars just like the city. 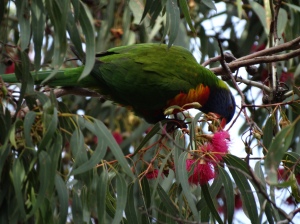 I think it’s time we agreed everything has it’s good and poor aspects, and stop being scared of what we don’t know. You never truly know until you go and experience the other side of life. So get out there, live on the other side. 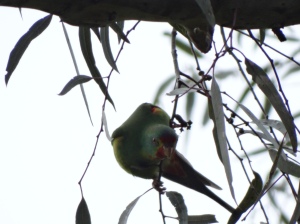 Another shot in bad light so it doesn’t do this bird justice, but what a pose!

It’s always pros and cons. If you didn’t have the city, you couldn’t live the life you enjoy. Without the country, you wouldn’t have many essentials that make up life as we know it. 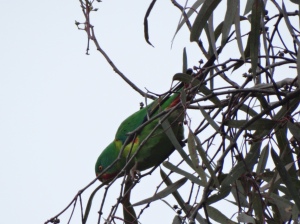 What a day! What an experience! I’m tempted to head back tomorrow…..

Point being, if a flock of an endangered species of bird that can migrate to anywhere they like choose the suburbs of the city instead of the country, can it really be that bad?