This is the continuation of a series about a road trip we took in July, 2015.

Not a great start to the day!

I was awake early, like 4am, after increasing my mood stabilizer dose because of a high mood the week before. I exhausted myself trying to put myself back to sleep, but I did eventually get a bit more sleep. I was happy not to be too doped out when I first woke up, but soon found I was in a generally slow state, speaking and moving slowly, not much energy, sluggish and feeling like I was dragging myself through quicksand. I didn’t do my planned bike ride, because I just didn’t feel up to it. I tested myself to see if it was a day that I could force myself, but it just wan’t going to happen right then. So I admitted defeat on the bike ride, and decided on driving around in the car instead. I had reasonable focus, and my attention seemed to be okay; a check I have to make before I commit to putting my slow self behind the wheel! 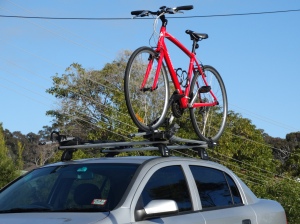 So in terms in the weather, it was the perfect morning. Gorgeous sunshine, freezing cold after a zero overnight temperature, but warmer in the sun and keeping on getting warmer. So change of plan.

First, go up to the lookout that loomed just over our cabin part – gorgeous, too much sun for photos, had to dim them all! It was a sun out, over exposure on everything. I haven’t had to deal with such brilliant light before. 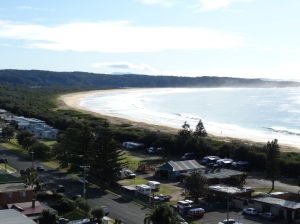 I got incidental nice views of a Little Wattle bird eating nectar when I got back to the car from the lookout. 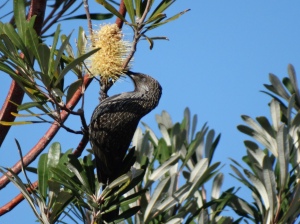 The best shot overall, the gorgeous blue eye and beak dipped into the nectar 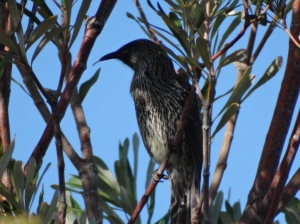 Fuzzy shot…but is that a tongue I see????

Done with eating, all puffed up against the cold in the shade

That was a dodgy affair! No signage, a non pathway up over the curb and through some poor person’s garden, hugging their side fence! I was looking over my shoulder the whole time, waiting for someone to come and boot me out! The path has been destroyed by tree roots and is so lumpy that a strained ankle didn’t seem like a stretch! And the last part of the “lookout”! Read: the abrupt ending of the path at a regular school yard fence which is almost falling off the vertical cliff!

Okay so maybe exaggerating the state of the path, but that’s the edge of the cliff, right there!

Since I had a lot of time to burn, I stayed and photographed two Purple Swamp Hens eating grass roots. The glossy feathers really showed up well in so much sunlight.

Dainty lady picking her way through the grass! (I don’t actually know that it is a lady….)

Oh there you are! How long have you been looking at me?

Next stop, pharmacy for more meds. Next stop, walk on the beach and impromptu chat with a couple of fellas about whale spotting, the shark attack last week that took a girl, commercial fishing, the water temperature, the latest daily temperatures etc. Nice views of the beach, the bay, the wharf. 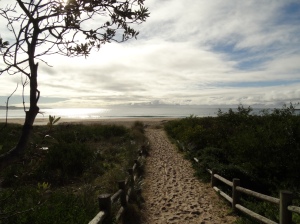 Path to the beach over the wet cold sand 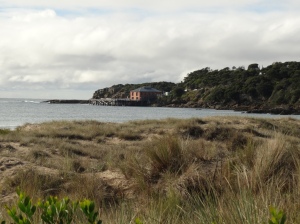 Then up to the top of town to another lookout, this time out to sea. It was a pot shot at seeing a whale, didn’t work but oh well, not to worry. I’ll get there eventually.

Back to the meet up to catch up with my hubby who was mountain biking…I was meant to meet him after an hour and a half, but I forgot to check the time when I left! Luckily I got back 5 minutes before he turned up. I’d pulled into the turn off before the one I left him at, which was the Tathra treatment plant. 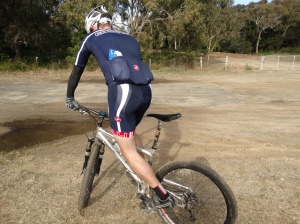 You’ve heard me rave about the Werribee Treatment Plant. This was about 1 millionth of the size and just your standard water treatment, but I’m very happy with the birds I saw! A lifer in the fun, flirty Jacky Winter and in the show off Yellow Rumped Thornbill! Thrilled with both! 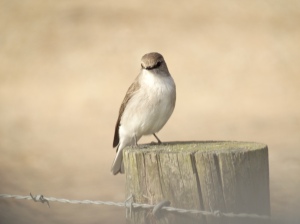 What a portrait shot! I’m pretty happy if I say so myself! The grey tinge at the bottom is a sliver of my car, should have aimed slightly higher but I was using the car for cover so I could get good photos 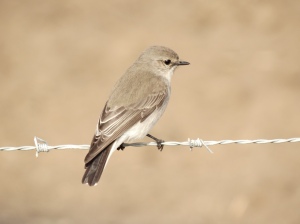 And now the back! Perfectly behaved birdie while I was hiding out of sight. After he caught sight of me he played flirt

Plus more views of the Little Wattlebird, and views of Grey Shrike-Thrush, another lifer in the Yellow-rumped Thornbill, and four species of duck, grebes, and a Whistling Kite. 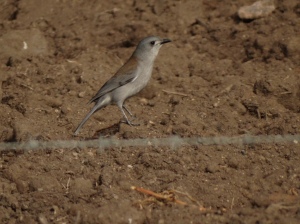 Yellow Rumped Thornbill, I thought it was a Yellow Robin but oops its actually a lifer!

The best shot of the week of the YRT, or of anything probably, and I just realised it wasn’t a robin!