I’ve been trying to get this done for days, obviously more than a week even but my computer has started down the slow walk to death after various bad treatments over the not so long period that I’ve had it. You know, dropping it on the floor while carrying it in one hand and food in the other (I mean tough choice, which do I save?), accidentally letting it fall off the bed while it was balanced on the edge trying to connect to the wifi while I’m upstairs (the wifi connection keeps getting weaker!), lugging it in a suitcase or carry on luggage or hand bag around the city and the world, letting it fall down the stairs while carrying it one hand stacked with all kinds of things that need to go up or down the stairs; all the way down the stairs! Balancing it on the laundry sink while doing the washing and maybe it slipped in…carrying it in the washing basket maybe getting it a bit damp, tripping over the power cord and tugging it off the couch, it all comes out! Obviously I live a bit too closely with my laptop, but that’s another issue. What have you done to your laptop?! says hubby. Oh nothing, why, it’s fine! But the toll has started taking its grip with a screw falling out, then another screw, then the backing coming off (but you can put it back on!) and finally a loose wire poking out! Oops! I do regret the amount of damage that I do…it’s becomes one long line of sorries! I never mean to do it, I never plan on it, and it always comes as a surprise somehow even though in hindsight obviously it wasn’t the best plan. Am I just clumsy? Hubby thinks more like careless or thoughtless or something. Either, either…well that doesn’t work well as text, but you know what I mean. The point of this gibber gabber? My computer which was never strong on finding wifi connections right in front of its nose has now almost ceased to find them at all! I stick the wifi right under its nose, it’s right there, but it secures the connection without internet, or connect to the internet but so tenuously that as soon as you want to actually USE the internet, it all falls down and drops out! So I’ve been trying on and on to upload a photo for this blog and I can’t! Jolly annoying since all the photos are on my computer only. And of course being away from “home home” I don’t have a USB to transfer the photo to hubby’s laptop. They are still on my camera so by some lengthy process involving cables and memory cards and installing software I’ll figure it out, but now my internet isn’t even sufficient to save this draft. Blah blah blah excuses excuses. On to the actual matter at hand!

Today is the last day of our cycling tour. It has gone really fast!! So far 78 kilometres, oh my. 78 kilometres of beautiful scenery, great food and birds; oh and nice company. Today is going to be our longest day, but plenty of stops so let’s do this! We started from Havelock North at 9.30am with the plan to cycle back to Napier, then onwards to the next part of our holiday. My quads are really stiff today! Maybe due to getting very wet, then very cold then huddling inside getting warm with no stretching yesterday blah blah. So I’m feeling a bit sluggish from that, then the first 3km are a small grinding gradient uphill making my legs feel totally feeble and useless. I hate grinding gradients! Although I am not a fan of hills, I’d rather go up and down sharp hills all day then grind slowly upwards. But after that 3km the rest of the day was lovely and flat so…besides at the end of that short 3km was an absolutely gorgeous winery, Black Barn Vineyard! I mean this was the epitome of a beautiful Tuscan vineyard set on a sloping hill with olive, fig and citrus trees, a private estate for rich people at the top of the hill with ocean views then a stunning winery including outdoor dining under the vines and…gee, am I gushing? It also has a cute boutique food and gift shop. It was so nice! BUT…it was before 10 in the morning so no tastings. It’s just a bit early. Besides, we’re not exactly starving for wine, hey? Next stop: Te Mata cheese factory! Oh yeah, much more interesting; I LOVE cheese! Tastings, tastings, tastings but sadly no purchases; just too difficult to get back to Aus. But seriously: Takina Gold, Camembert, pink and white terraces named after the now-extinct landmark, sheep hard cheese Sleeping Giant, young sheep cheddar, drool, drool, drool! Aahhh, but sadly no. But instead we had a drink and snack and I discovered the amazing New Zealand creation of berry smoothie in a bottle! Delish! Now back on the bike. We could sit here all day but…gotta get back on the flood levee bike paths and follow the Tukituki river out to the coast and check out the lovely wetlands around the mouth of the river. What a lovely ride once again, so pretty and what a fine day today; fine, warm, excellent! Then through the cute little town of Haumoana and along the coast on a gravel track to the stunning Elephant Hill winery for a tasting. It’s another beautiful vineyard and a unique winery with the outer building completely made of copper, designed to look like the ocean; and it really does, sea blue with an infinity pool, very posh eating, all the drinks back lit with blue lighting, and very professional staff. Actually by the time we got there I was a bit in the zone. 3 days of riding, of socialising, of new experiences, new people, new scenery, and I am a bit washed out. Plus its our last day in the north island and I’m not at all sure that I’ve seen enough birds yet. A tasting or two in and I’m over it. Instead I’m going to wander around outside in peace and quiet and solitude and talk to the birds and get some photos until the others are ready. 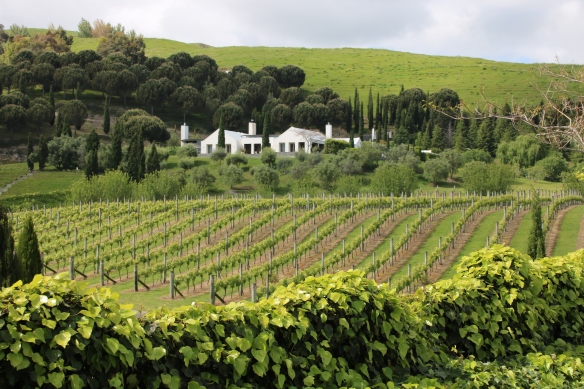 Next up is lunch at the Te Awanga winery up the road (literally, like 300 metres) and a tasting at the table there. Much better than standing around tasting. Another beautiful lunch and a lovely lady who brought us tastings with sea views and a gorgeous cottage garden. Actually I’m over tastings, well not the white ones but reds have gotten on my wick, I never liked red much to begin with but tried them anyway and a couple were alright in that they weren’t very red-like, but I’m done with them now, unless its a sticky dessert type thingamebob. It’s odd, with the last tour I didn’t get sick of tasting over the 5 days, but here after 2 days I’m done. Well after filling our faces, off back to Napier. After some issues with wind, it’s meant to be a tail wind all the way home! YIPPEE! And what do you know? A lot of the way home is along a wetland between the shore and the levee, YAY for me! Birds and more birds! So 47km done today bringing our grand total to 126km with the group, and another few kilometres around town. Unfortunately my grand plan of doing the 1 hour walk around the boardwalk on the estuary in town didn’t really eventuate. I mean let’s be realistic: 47km today, 134km all up and I thought I was going to do a walk? With no way to actually get there once the bike was returned? No, no. A shower, a spa to repair my legs and wait for it, the best is yet to come! Dinner at the Mission winery! Exceptional 3 course meal! Truly amazing! Crayfish bisque; superb! Absolutely divine pork belly, which nearly everyone at the table chose. And vanilla and peach schnapps creme brulee with the most amazing super thinly sliced pink lady apple flash frozen and super sweet! Fantastic! Definitely a recommendation. No sad goodbyes, just glad that we got to do the tour and on to the rest of all our holidays.