If you look carefully, and you shouldn’t feel the need to, you can see the signs of me slowing down. Mornings get harder (and they’re never really my strong suite, but I’ve impressed myself lately), I stop answering the phone (which is always my strong preference but sometimes I’m better at it), I stop doing anything much around the house (which isn’t saying much but still), I stay in bed longer and longer, getting up and going is harder, and I dive into my laptop and live there because its more predictable and controllable in there than in the outside world. I jump into a world that isn’t reality, where beautiful music and sitcom laughter falsely pep me up. But I take falsely pepped up over no pep most days.

This week I haven’t been doing so well. I know why, but I can’t seem to shift it and improve my mood. There’s just been this one thing that’s bugging me, and I haven’t been able to physically do anything about it to this point and its just biting and biting. That has worn me down as well as consuming my thoughts with less than impressive ideas about myself. It’s brought about a constant level of fight or flight instinct in me, and between palpitations and just feeling amped up it hasn’t been fun.

At work on Sunday a patient came in desperate for something to help him sleep. He really seemed quite beside himself, saying he can’t get to sleep til 2am, doesn’t sleep long, and then is bombed out all day and can’t get anything done for being tired. It seems like a pretty clear case for handing out a Pharmacist Only sleeping tablet, but this man is on an old school medication that interacts with EVERYTHING! He was well aware of this and told me about it before I could ask about other medications. So I did the proper thing and checked to make sure that I could offer him a safe option. Most of the medications we can sell are sedating antihistamines like Phenergan and Polaramine which you may well have heard of. But these interact with his medication so they’re out. There was only one option (other than referring him to his doctor whenever he could get in) so I set him up with that, explained it all to him, reassured him that it was fine, advised him to take a half dose to start with and we both went on our way happy.

Then I got a call from him saying he’d read the leaflet in the box (of course, he would be the one in twenty to do so!) and it said not to take it. I explained again that the reason not to take it with his medication was because of drowsiness not another side effect, and in his case we wanted the drowsiness. At this point I recommended he discuss it with his doctor before taking it if he didn’t feel confident, but he said I was the medicine expert so if I said it was okay, then he was okay with it. Flattering to hear, but a bit of a terrifying responsibility at the same time. But I was happy from what I read so all good. But that call back set off some doubt in myself, some insecurity that maybe I got it wrong and I just cannot get rid of the [insert adjective] questioning in my head!! I looked it up again, and again, and although it seems right, there’s just something!! Did I do the wrong thing? Should I have not given him anything and hoped he could see his specialist soon? Is my knowledge still not up to date enough? What if something happens?? That last one is a killer of peaceful thoughts! Is it likely? No. But…and that is pretty much the loop my brain is feeding me.

I’ve tried to breathe: in 2 3, out 2 3 4 5. I’ve tried distracting myself, thinking of something else like our holiday to Queensland sometime later this year: I now have put together the most thorough bird watching to-do list that you’ve ever seen, have an order pending for a Cairns specific bird book, and GPS coordinates for good locations! I tried eating: fail. Telling a colleague: they weren’t concerned but what does that mean? The responsibility doesn’t rest on their shoulders so…I was asked to work yesterday so I was going to look the patient up and give them a call to check everything is okay, but my shift got canned. So that phone call got pushed out til tomorrow. It’s been a long week!! I’m just stuck in quandry, in limbo waiting for the knife to fall, the bell to toll, the consequence to descend on me. ARGH!

So my mood has struggled. Monday I was in bed til lunchtime, or after lunchtime; sometime around 3pm possibly. I don’t think I did a single thing. Wake up, sleep, wake up and breakfast, sleep, wake up and snack, sleep, wake up and drive 2 minutes for KFC, sleep, dinner, sleep. Very interesting. I was bugged by this sleeping tablet business all day, but I didn’t realise how much it was sapping my energy, motivation, interest in anything else til later. But every time I woke up either overnight or during the day it was right there, clear as crystal in the front of my mind!

Yesterday I managed to get out because I had a voucher with a use-by date to redeem at the aquarium, and at Pancake Parlour; freebies are a good motivator. Breakfast/brunch near an open fire while sorting bird photos on my laptop was pretty fun!!

Then on to the aquarium where I enjoyed walking around in a removed kind of way, apart from the lovely shallow rock pool with little rays and elephant sharks (which are so ugly!!) and little fishies; that was awesome. Then on to the behind the scene package where we got in a glass bottom boat and watched rays and sharks and fish swim just beneath us. That was pretty cool. But the breakthrough was feeding the rays. I’m not talking about the little ones, I mean the Smooth Stingray species that is 3 or 4 metres across. They come up to the side of the tank for feeding, and they aren’t meant to, but they flap flap flap their “wings” against the side and cause huge splashes!! So naughty, and so fun fun to watch and take photos of! That got me laughing out loud; I really enjoyed that. I was smiling for ages after that.

Then I went down a couple of levels to the bottom of that tank so I could watch the big sharks and rays swimming around through the glass; another wonderful experience! That really did it for me, and it is SO important to have things that do it for you on not so great days. Last stop was the penguins, and a cute penguin onesie for a baby who I know will be coming later in the year. I was still wrecked by the end of the day, I was still dragging myself around the levels of the aquarium, I was still tired but I got some smiles and laughs in which makes it a win as far as I’m concerned. It didn’t take much to suck that out of me, but at least it was sucking from happy to regular, not from regular to down. That’s a good thing too.

We had a chat last night, hubby and me. Something about me being in a rut, lost in my laptop, not really engaging with the world or him. And I recognised it then as a symptom, that I really was down a bit and struggling a bit and it was cause and effect happening right there in my easy chair. I was almost at a point to make an appointment with my GP for a pep talk and pick me up, but I’m still holding that card because I see my psychiatrist next Tuesday.

So what about today? There is purely one reason why today worked. Wheel Women had a ride on that I had RSVP’d too but wasn’t sure if the weather would turn out good enough. Last night hubby said: “go even if its raining because there’s only meant to be a small amount of rain, so if it’s raining its probably nearly done”. And it happened exactly like that. Even though it was POURING rain when I woke up, I got up, got dressed, got ready, checked in to make sure the ride was still going ahead, and drove over to Kensington. It rained the ENTIRE way over there, except the last 1 to 2km, and then it was the most spectacular morning you could possibly imagine. Blue skies, the Maribyrnong river was looking stunning in blue as it reflected the sky, the grass was green and it was good to be alive with friends enjoying the sunshine and the fresh morning. That alone does it for me, and I would have been so disappointed had I stayed home.

Instead we had a lovely time chatting while we rode, chatting over coffee and chatting all the way home again!!! And then, because I wanted to check out some birds (so wishing I had my camera in these perfect conditions!!) and get some shots of the city that I couldn’t take while I was riding, I did the whole thing again!! Yep, 2 loops along the Maribyrong and I can’t think of a better way to spend the day! Right now, I’m happy. I have a low level of anxiety still going on but I think I might take a Valium to give me a bit of a break from that so I can enjoy this feeling of happiness and friendship and accomplishment. Every time I do that ride along the Maribyrnong I remember the first time when I thought it was the hardest thing in the world! Now I just spin along and enjoy it for the scenery, and don’t even notice the kilometres going by. It’s nice having landmarks to show how far you’ve come!! I always appreciate them.

What else was good about today? I went back again to look at birds and I found some terrific ones!! A Hardhead duck so close I could touch it when they’re normally shy birds. A stunning male Superb Fairy Wren in full blue plumage on a fence post in the sun (oh camera, wherefore art thou camera??!!). A group of Little Black Cormorants fishing together. A pair of Red-rumped Parrots flying off JUST in front of my wheel! A Great Egret in slow, graceful flight. Beautiful, lovely day. Plus a new Wheel Women friend. And watching a recent Wheel Women member improving with every ride; I love that!! Let’s hold on to that happy!! 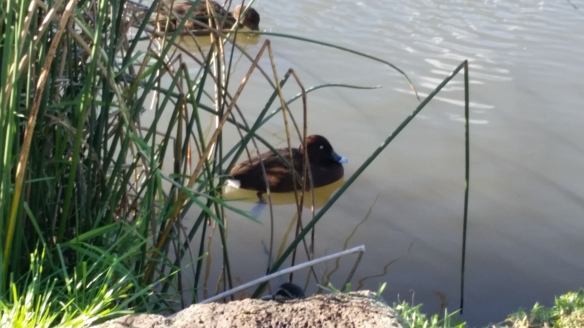