After such a great, but late, night last night I had a bit of a slow start but in a good way. Not because I was feeling depressed, but just because I took my tablets late and am still a bit bombed out. I was excited for this morning. Music at midday with the Royal Military College Duntroon band was on at Canberra Theatre Centre (or so I thought) so that got me out of the house and on my bike at 10.40am for an 11am start. Unfortunately when I put it in my diary I put November instead of December so that was a big let down, and now what to do next? I think I might have gone home and sulked but the Canberra Museum and Gallery happened to be right across the square so…why not? It’s been on my list, here I am right in front with my bike locked up and nothing else on my ticket, so here we go. And actually I’m really glad that I went.

It’s a really interesting place, as museums always are. This one is about the size of 3 exhibition rooms at the Melbourne museum but they pack the content in. The first exhibition was Canberra stories, lots of old tales from the foundation, the war, the building of the city, and all kinds of bits and pieces. Then the UNESCO documents exhibition: famous documents of all kinds, like the Mabo case and diaries, war documents, environmental and historical documents of all kinds! Lots indecipherable to me in the old fashioned joined writing, but fascinating just to see documents so old and to think that back then absolutely everything was written by hand! Then an Australian record in the Guiness book of records for the largest collection of Doctor Who memorabilia! I’ve never watched the show so it was all a bit lost on me, but the amount of stuff the guy had collected was impressive by itself: DVDs, books, Tshirts, posters, mugs…the list goes on! And finally a delightful collection of Sydney Nolan paintings. I’ve never really paid them much attention before, but that guy had the best sense of humour in his paintings! They were all Kelly era paintings but so much comical cheekiness comes across, like the police whose diary page says he had to hide out in a wombat hole, but is actually shown diving into it head first with legs way up in the air and totally visible! If I had one of Sydney Nolan’s paintings in my house I believe it would make me smile every day! Of course if I could afford one of his paintings… 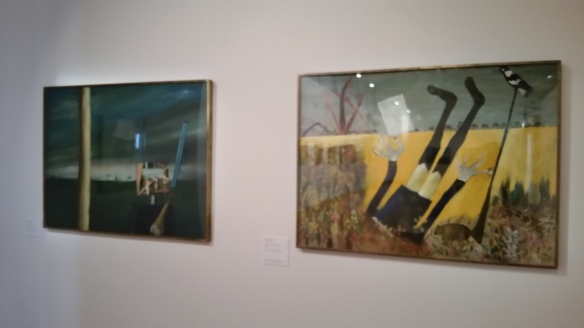 A terrible photo of a great painting…might have to go back for a better one!

The afternoon was a bunch of jobs: trying to find out where our mail is going goes it ain’t coming here, it’s not in Melbourne, it’s not going to our last address, and I don’t believe they’ve received anymore at the office here. Australia Post! Then insurance forms for my next monthly payment, some blogging (not that you’d believe it with how behind I am!), a load of dishes, a load of washing, having a look at some new bird photos and that was all she wrote. I’m pleased with today. I’m glad I got out, even if it was a false start. I still made something of the day and I can be proud of that. Something to remember when I’m feeling like I do nothing and am no one. I found one more thing that makes me smile and that is worth a thousand other things in this world, in my world.

I’m sort of feeling like I’m crawling out from under a rock in some ways, like I’ve been checked out of life for a while with my head in my own problems and not seeing anything else. But just now I caught my husband’s eye over dinner at our tiny 2 person table and realised that while eating on the couch is easy in our place it just isn’t the same as sitting across from my love and having a conversation. I need to pick myself up out of my own dribble and pay attention before life passes by!